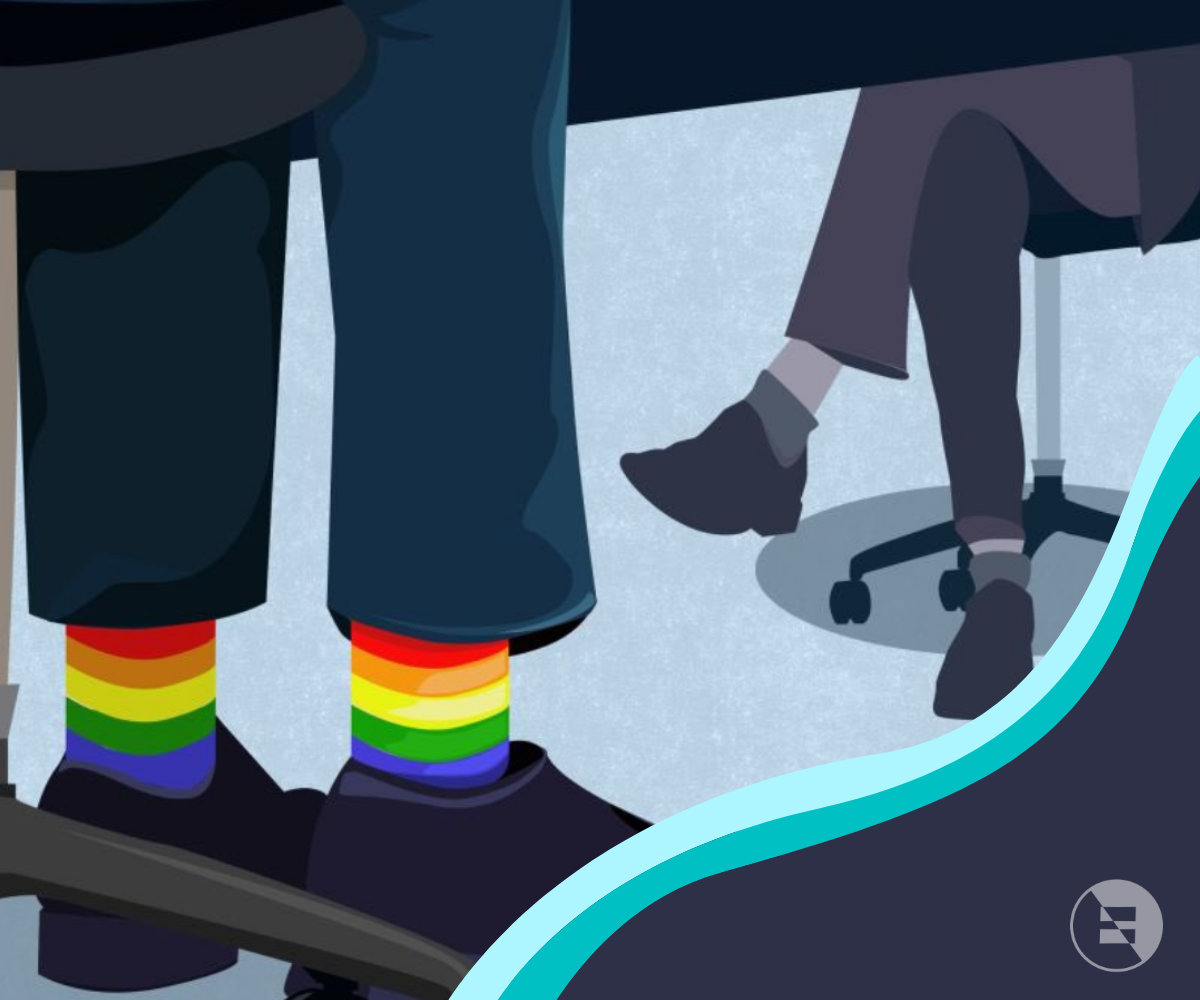 Heteronormativity in the Workplace

How does heteronormativity affect non-heterosexual individuals within their everyday work-related experiences?

How many films have you watched that feature a love story between a woman and a man? Or how many times have you been browsing in shops that have sets of ‘his’ and ‘hers’?

Most people are familiar with the term homophobia, the irrational fear or intolerance of individuals within the LGBTQ+ community. However, people are less aware of heteronormativity, which promotes heterosexuality (one woman and one man) as the only “normal” or “natural” sexuality. Thereby, individuals are assumed to be heterosexual (straight) until proven otherwise, and other sexualities are perceived as less/not normal. Therefore, alongside the exposure to homophobia, non-heterosexual individuals must consider staying closeted at work due to heterosexism, the bias in favour of “opposite-sex” relationships and attractions. The graphic below from Meg-John Barker’s book ‘Queer’ illustrates the difference between heterosexism and homophobia (their books are brilliant if you would like to explore gender and sexuality further).

Sex, gender, and sexuality are conceptualised as a binary. Traditional gender norms expect males to be masculine and females to be feminine, with heterosexuality being the normalised and dominant sexual identity. Assumptions are based on societal norms, whereby, if the sex (male or female) and gender (masculine or feminine) of an individual is known, then their sexuality (heterosexual or homosexual) can be automatically presumed. For example, if a female is feminine, she is presumed to be heterosexual. Non-heterosexual individuals are often stereotyped due to lack of adherence to gender norms; therefore, society feminises gay men and masculinises lesbian women. Below are some examples of the assumptions surrounding sexuality (graphic from Meg-John Barker’s book ‘Sexuality’).

What impact does heteronormativity have in the workplace? National statistics have evidenced an increase of non-heterosexual populations within the UK, equating to approximately 1.4 million people. Therefore, the acceptance and inclusion of these individuals within the workplace is an important concern. Sexuality is invisible, thereby, individuals have control of sharing this information and can decide, to whom, how, when, where, and if they disclose their identity. Socialising with others and forming close relationships is commonplace within work environments, however, non-heterosexual individuals often compartmentalise their lives in attempt to keep their personal and professional lives separate. Indeed, 35% of LGBTQ+ staff in Britain have hidden or disguised their identity at work as they feared discrimination. This statistic rose for those with dual marginalised identities, to 43% for disabled LGBTQ+ individuals, and 42% for ethnic minority LGBTQ+ individuals.

Why is this? If you take a moment to reflect, at work how many times have you overheard conversations between heterosexual individuals about their partners or have been shown photos of their children? If you are a member of the LGBTQ+ community, do you stay quiet when people are discussing their weekend plans, so you don’t reveal too much information? It is taken for granted by heterosexual individuals to discuss their relationships openly, but due to heteronormativity LGBTQ+ individuals often think twice about divulging their partners pronouns and question if bringing their partner to an event is worth risking backlash at work. There are various reasons as to why non-heterosexual individuals are often concerned about disclosing their identity, including its impact on developing close relationship with co-workers, being accepted by others, and loss of credibility. However, keeping their sexuality a secret can often cause guilt when forming close relationships with others due to not being able to be their authentic selves, or can sometimes result in individuals confessing. Moreover, staying closeted can impact both the individual and the organisation as it has the potential to increase anxiety, and depression, alongside lower job satisfaction and reduced productivity.

Likewise, sport mirrors these issues surrounding heteronormativity and homophobia, in fact, some gay men have expressed that they expect to experience more heterosexism if they work in sport compared to other industries. The UK LGBT National Survey found that 45.5% of individuals expressed that they avoided being open about their sexuality at sports clubs and fitness/leisure centres, with “abusive chanting at sports grounds” being listed within common hate incidents. Despite the progress that has been made within sport, the traditional views of gender and sexuality are used as guiding principles which reinforce male superiority and heteronormativity. Due to the association between sport and masculinity, women within sport are often assumed to be non-heterosexual regardless of their identity. Stereotypes are used to stigmatise individuals, discourage their participation, or to devalue them. In attempt to avoid being stereotyped, women within sport frequently emphasise a feminine appearance by wearing make-up and having long hair, and often distance themselves from known non-heterosexuals. Men have also even been known to participate in sports deemed as more ‘masculine’ and conform to social expectations of ‘how a man should look and behave’ to prevent suspicion.

So, how can you help eliminate heteronormativity within the workplace?

It is suggested that training and educational opportunities, and institution anti-discrimination measures can reduce the perceived risk of discrimination in the workplace and can encourage individuals to feel empowered to disclose their sexuality. As these factors occur at an organisational level they may be out of your control. However, as mentioned previously, the experiences of non-heterosexuals within the workplace can be impacted across multiple levels, including at an interpersonal level. Therefore, the way you behave around your LGBTQ+ colleagues or the language that you use can signal inclusivity (or the lack of), emphasising your role within the inclusion of others. Here are some ways to consider the LGBTQ+ community within your daily interactions at work:

- Avoid presuming someone’s sexuality, as many individuals do not fit the stereotypes associated with lesbians and gay men etc.

- Avoid presuming someone’s gender identity, ask what their pronouns are or how they would like to be addressed.

- Avoid presuming the gender of other people’s partners, e.g., asking women if they have a boyfriend/husband, instead use gender neutral terms such as partner/spouse.

- If a colleague brings someone along to a work event, rather than presuming the relationship between them, ask to be introduced to them instead.

- Do not label things in a way you wouldn’t with heterosexual relationships, e.g., saying “gay marriage” rather than marriage.

- Do not ask any inappropriate questions that you would not ask to someone that identifies as heterosexual.

Being conscious and adopting more respectful and neutral language towards, and regarding non-heterosexuality will contribute to a safer and more enjoyable work environment for all.

Beth Burgess is a PhD student at the University of Worcester, whose main research interests concern marginalised groups within sport, with a focus on sexuality and gender. Prior to commencing her PhD, Beth worked as a Research Assistant and Technician on a European Commission funded Erasmus+ project, the Gender Equality Toolkit for Generation Z (GETZ).

If you are interested in the progress of my PhD research or would like to get in contact, then please do so via email or through my social media accounts below.